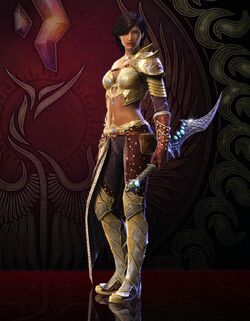 The first reborn Ascendant of the Defiant. She can be found in the Defiant capital, Meridian, and is Eth. [1][2]

Artifacts exist of a flourishing city-state known as Catari, dating back to the Eth Empire. Though the empire fell, the family line of the state’s sorcerer lords endured, continuing to produce some of the finest mages of Telara. The sisters Aurum and Asha Catari proved no exception to this tradition. The pair distinguished themselves among the pupils of Quicksilver College, though in very different ways. Aurum was the shining star of the academy, always performing to task and beyond standards of excellence. Asha, the younger sister, was just as gifted, but irritated at the strict and outdated curriculum of the college, questioning the effectiveness of century old methodologies. She was expelled in her third year for pursuing the arts of the warlock, a subject forbidden at the school. The scandal caused her father, Theo Catari, the representative of the southern races and High Mage in the court of Mathos, to disown her.

Unrepentant, Asha traveled to the southern lands of her Eth ancestors and joined the ranks of the Dragonslayer Covenant, an ancient organization dedicated to keeping the cults of the Blood Storm at bay. She quickly established herself as an adept of the first order, if a little green and reckless, and became their fiercest arcane warrior. It was on these merits that she was sent ten years later as their representative to the battle camp of Zareph Mathos, to warn him of the link between his brother and the Endless Court. Instead of returning to the Covenant straight out, she remained to fight with Mathos’s forces. When then the Shade was unleashed, Asha was among those destroyed in its dark power.

Beyond the veil, Regulos drew her spirit from the Soulstream and brought her before him. The Destroyer infused her with great power, a temptation to convince Asha to become his general on Telara. She refused. Enraged by Asha’s denial, Regulos attempted to destroy her, igniting the very energy with which he had embroidered her soul. But before Regulos could finish, Asha’s agonized spirit was pulled away as the dread god howled in frustration.

Asha awoke, gasping for breath, within a machine in the Shadowlands. Orphiel Farwind, her mentor and friend, stood beside her, looking at her with an expression of triumph. He explained that he had used the technology of the ancient Eth to return her to life, and that she was merely the first of the warriors he planned to return. He asked her to be his champion and second in command, continuing the work they had done within the Dragonslayer Covenant. She agreed, but in agreeing she admitted much of her motivation sparked from a desire for vengeance on Regulos. Orphiel realized she was not the same young woman who he had sent to Zareph so many decades ago. Physically, she had changed; covered in glyphs of power that flared up on her skin. She was also calmer, quieter, and intensely focused. The headstrong, reckless girl was gone, and in her place was a being that was no longer quite human.

Orphiel’s other followers could feel the change as well, but were not as easily accepting. Asha’s planar powers, and eventual role in the fall of Port Scion made her a pariah to all but her closest comrades, but the unease of her fellow Telarans failed to concern her. Asha was intent on her cause, and, together with Orphiel, she would help form a new organization dedicated to saving Telara: the Defiant. [3]

Being the first Ascendant soul, Asha Catari was a unique figure amongst the Defiant. In the original timeline of Telara, Asha was one of only a handful of Ascended Defiant created by Orphiel Farstrider using the original resurrection machines. Asha and these few were unable to prevent the destruction of the World by Regulos due to the fact they were branded as heretics and persecuted by the Ascended of the Vigil. After the failure of the Guardians, and as the armies of Regulos closed in around them, the remaining Defiant put all of their effort into creating a large scale program geared toward the resurrection of Ascended Souls they could send back in time to prevent the destruction of Telara. With this new army of Ascended Defiant from the future, a new timeline will be written in which the Defiant will play a role equal to that of the Guardians in the defeat of Regulos and his Blood Storm.

"I learned at a very young age that the world is full of people who are terrified by knowledge and the power it bestows to the individual. Freedom is to be seized by those with the courage to think for themselves."

Ends of the days[edit | edit source]

Asha Catari was the first Defiant created soul. She was a valorous fighter before Regulos killed her with his army. As a soul, Regulos even offered a place as General in his army but she said no. Regulos hit her and even through her new body, the scar can be seen.

'We have power, you and I. It is both our greatest asset, and our greatest burden. You must face all the potential consequences of the power you wield, and accept them, before you can use it fully.

"What are those Marking?

I died, like you, but I was brought back by the original resurrection machines. Beyond death, I confronted Regulos. He asked me to be his avatar. I refused. These marking are the result of the terrible power he burned into me; a power I am at least able to use now to fight back against the bastard.'