The first Ascended soul to return to Telara and champion of the Guardians. [1] 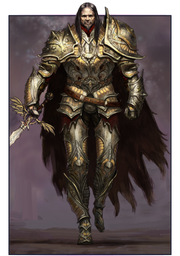 Stories disagree about Cyril Kalmar’s origins, and he seems to have sprung, fully-grown and larger-than-life, into the hearts and minds of Mathosians. It is known that Cyril was a giant of a man, possessed of courage and might as well as discipline, compassion, and good cheer. A throwback to the heroes of the ancient songs, Cyril’s exploits inspired the people.

Cyril was already a living legend by the time Prince Zareph went to war against his brother, the usurper Aedraxis. Though Zareph knew Aedraxis was a dragon cultist, the bone-loyal Mathosians saw his campaign as little more than a fratricidal coup. Early in the war, Zareph could not gain popular support, and found himself besieged at what is now Shadefallen Keep in Gloamwood.

Surrounded by dragon knights and observing from a safe distance, Aedraxis ordered the final charge and sneered as his men scaled the castle walls. With a sudden clash of steel, several of his bodyguard crumpled like tin soldiers. From out of nowhere, Cyril Kalmar himself had charged into their midst, hacking his way toward the traitor-king.

Cyril lopped the last dragon knight’s head from his shoulders and tossed it all the way to the castle ramparts, where Zareph’s men saw that the helmet held only a rotting skull. Legendary Champion clashed with necromancer-king for hours, though the bards sing songs that they fought for days. Unable to unleash his vile magic on Cyril without forfeiting all claim to popular support, Aedraxis slowly succumbed to Cyril’s superior reach, experience, and crushing might.

Driven to desperation, Aedraxis uttered a horrid spell that melted the flesh from his mortal soldiers, set them on Cyril, and fled like a dog. “This is what we’re fighting!” shouted Cyril, and he stood alone against the wretches until Zareph came to his aid. Foul blood flooded the field as the two great heroes showed Mathosia the tyrant’s true face. 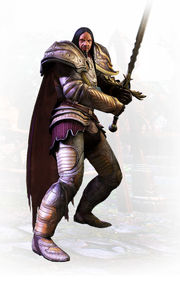 None doubted that Zareph was the true king with a folk hero like Cyril Kalmar fighting at his side. All Mathosia rejoiced, for with Cyril as his general, the prince would surely topple the necromancer.

Cyril died when Aedraxis released the rifts, died with the rest of Zareph’s army. But the Vigil’s Messengers returned his spirit from the void, and commanded Cyril to lead an army of reborn heroes, vanquish the Blood Storm once and for all, and remake Telara in the gods’ image. Cyril embraced his divine charge and arose amid the carnage of that apocalyptic battle, to help slay Aedraxis in his guise as Regulos’s avatar.

Cyril accompanied Prince Zareph to Port Scion, and together the great heroes fought a losing war against the monsters from the rifts. But the Defiant drew Zareph down a heretic’s path, which ended in the fall of the ancient port. Zareph vanished, and Cyril led the remaining faithful to join the Dwarf Lord Borrin in the new city of Sanctum.

The Cyril of today would barely recognize the raucous, freebooting youth he once was. His booming laugh has been replaced by a throaty chuckle, his daring exploits with thoughtful command, friendly kindness with fatherly authority.

Cyril commands the Guardians from Sanctum, refusing a crown because this is a time for champions and not kings. A towering figure, he moves in inch-thick ornate plate as easily as a peasant in his tunic. His eyes flash like thunderclouds and his forces strike like lightning, yet Cyril only wishes to end Telara’s enemies with great swings of his ancient blade, as he did in a time when living legends were rare.