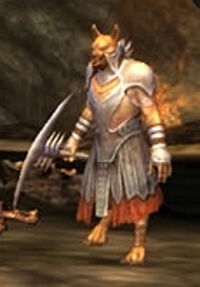 On Expert mode, Rorf has three adds instead of one. The strategy that seems most effective is to pull all of the adds together behind the pillar in the center of the room. Rorf moves very slowly around the pillar to get back into line of sight of you and his pets. While in line of sight, Rorf will shoot spectral pets at random targets for 1500+ damage, so make sure you aren't visible to him. When the pets drop below 50%, he will start casting a channeled heal on them from time to time, which can be interrupted to speed up the fight. AoE down the pets, the order doesn't seem too significant. When the pets are all dead, focus the boss.

An alternative method is to simply stand there taking all the damage and nuke him down. Obviously this will cause quite a bit of stress on your healer, and will most likely not work properly in the average PuG. Be aware that he randomly teleports around the room as well, meaning you need to move his pets towards him every now and again. Interrupting his heal stays important during the whole fight. This is a fairly obvious casting animation of him pointing his spear towards one of his pets, and as a tank this is easily interrupted. 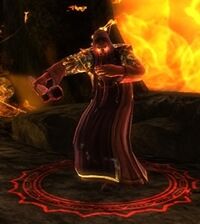 Pyromaster Cortilnald is not very different from normal difficulty when leveling. Other than hitting harder. So long as you are paying attention to debuffs and your standing locations to dodge the fire pillars, you can easily push this boss over without breaking a sweat. Be careful, it is easy to LoS the healer.

Flamebring Druhl is a new boss for Expert difficulty only, he appears in the open area just before Emberlord Ereetu after you clear the trash in the area.

Tank the boss in the middle of the room, right where the stairs to the lower level are beginning. The party should surround the boss while staying at max range, each party member standing in one direction (North, West, East, South). When the boss pulls everyone in, all party members but the tank quickly move away from the boss to avoid taking too much damage. Once everyone is back at their position, the dps resumes. The tank just stands in the middle throughout the whole fight.

Emberlord Ereetu is not very different from normal. Other than flame pillars that appear faster and overall more damage. It is easiest to start in one corner and the tank slowly kites around the outer edge of the platform, don't worry, you cannot fall off. The tank needs to be wary when a new flame pillar is up so ranged can move out of it's area of affect, it will kill you within a few seconds otherwise.

Oludare is a new boss for expert difficulty, he is back down the bottom where you encounter the first boss, however you must first run a gauntlet of mobs and keep Helena Brass alive for an achievement as well. If you die on the gauntlet you can run back in and go straight to the boss.

For this fight it is best for ranged to stay spread out, the tank should pickup Oludare where he is standing. He will randomly charge a player and run back to the tank and on occasion will stop moving / attacking for a few moments and cast 3 large area flame pillars when he next runs. Be ready to move and reposition yourself. The flame pillars will subside before he does it a second time.

Ciderhelm's Guide to The Fall of Lantern Hook Expert