Foul Cascade is a dungeon in the Scarlet Gorge zone. The dungeon is roughly circular with a large death rift in the middle which imprisons a queen gnar. The three bosses around the outside of the circle must be defeated before the last boss fight can be started. This instance includes three quests, one of which is automatically repeated every time you enter the instance.

The dungeon features varied packs of enemies to fight, none of which require any tactics to defeat.

The first two bosses, Krasimir Barionov and Countess Surin Skenobar are standard tank and heal fights. The third boss Matron Verosa has 2 enemies with it, and periodically throughout the fight they take turns in becoming immune, simply switch target to one that is not immune. The final boss Queen Vallnara will unleash after the idols surrounding it are killed (they do not attack back). She will randomly charge at a party member and apply a DoT that lasts about 19 seconds. As a healer, you must get rid of this as quick as possible as it has a nasty effect of killing your party members. 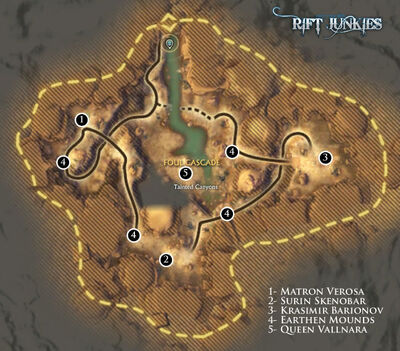