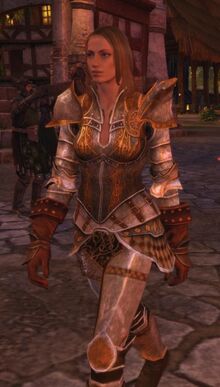 The humans are a playable race in Rift: Planes of Telara that appeared some time after the Age of Legend, and has since split into several tribes, including the Mathosians and the Eth.[1]

Humans first appeared in the High Elven forests of Tavra some time after the Age of Legend. Unlike many of the other races on Telara, humans were created by a collaboration of all the gods. The first humans were little more than wild beasts that foraged through the forests in very loose clans with no language or apparent intelligence.[1]

The High Elves treated the humans kindly, like all other creatures in their care. Humans, however, proved to be more adaptable and observant than the other creatures, and so they flourished, eventually learning languages, magic, and the tenets of civilization. It was initially difficult for the long-lived High Elves, to accept this change since it was appeared that the humans became civilized almost overnight. Over time, however, a close relationship developed between the elves and the burgeoning human tribes.[1]

As Humanity continued to grow in size and sophistication, many began leaving the forests to explore and settle in faraway lands.[1] Two great tribes of humans, the Mathosians and Eth, both of which developed great empires, date from this period. The Eth are a tribe of humans that ventured south, adapting to the harsh deserts[2] , while the Mathosians are the humans who elected to stay with the elves for many more generations, learning philosophy, music, and the tenets of law from the latter, eventually venturing north out of the forests.[1]