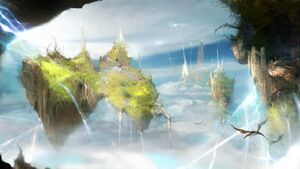 Concept Art of the Plane of Air.

One of the six elemental planes, from which the dragon god Crucia of the Blood Storm came. The elemental ancestors of the Bahmi, the Shalastiri, arrived on Telara through a rift from the Plane of Air at the time of the first Blood Storm Wars.[1]

Like the onset of madness in a sane man, Telara may be scourged at any moment by evil from its very air. The sky could split above an open plain, or crack over the highest peaks. Crisp, serene air twists into a hateful storm, winds whipping and swirling with such fury they tear boulders from the earth, whirling them about like a mad juggler’s toys.

The fortunate who stumble into the radius of an Air Rift are crushed by these boulders. Others have their flesh scoured away by debris born on the razor winds, or are snatched up by the storm, cooked by the lightning, and rent limb from limb by the monsters flying through the shimmering rift.

The Plane of Air is made up almost entirely of its primary element: an endless, turbulent sky. Cloudscapes replace landscapes, roiling and writhing, crashing together like continents. Air elementals and djinali ride the lightning that arcs between thunderheads, while rocs cruise the twisting wind, feasting on winged serpents.

Chunks of the thunderbirds’ prey can fall eternally, or splatter upon the floating islands that spin through the sky. The Plane of Air’s few land-bound creatures make their homes here, isolated for eons until the winds push two islands together and the denizens fall to xenophobic warfare.

Like the pitiless sky, creatures from the Air Rifts are uncaring, arrogant, entirely heartless. They are the wind that twirls a falling man end over end like a shiny bauble, letting him crash against the rocks without ever raising him aloft.

Griffons, rocs, and harpies fly Telara’s skies, lifting cattle back to their mountain nests—and only cattle, if the cowherds are lucky. Brutish gargoyles crouch on the parapets of abandoned castles, while cockatrices nest in towers, the filthy scavengers ready to swarm the unwary with plague-ridden claws. Vespids—wasps the size of horses—venture from their barrow-hives, hunting for mortal bellies in which to lay their eggs. And yetis barrel down from the mountain peaks, shrieking like the wind, hungry as a yawning crevasse.