The Plane of Death is home to the damned. Hordes of skeletons and zombies march across fields choked with the blanched, broken bones of the dead. Obsidian shafts thrust from the ground like great, black blades. Liches, mummies, and Bomani demons crouch in the jagged shadows, while fleshcrafted abominations lurk beneath oily, black pools. The inhabitants of the Plane of Death are the spirits of those dead corrupted or seduced away from their final resting place.

This is the domain of Regulos the Destroyer, patriarch of the Blood Storm. Telara’s protectors vanquished Regulos when he first attempted to devour the world, destroying his physical form and banishing his spirit to the planes. His hunger to return has only grown since then, but he cannot commune with his followers unless they pass beyond the Ward that protects Telara. Indeed, more than one mage has found a way to walk the planes and been lured to do the Eater of Worlds’ bidding. Regulos’ followers know their quest for power could end all life, but welcome death as simply another state of existence, where the damned will call them master. [1] 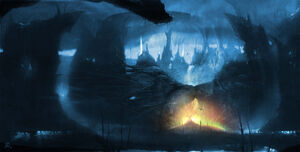 Concept Art of the Plane of Death.

The Plane of Death is an endless, flat expanse of dust and bleached bone. Shadowy tendrils slither across the horizon, while vast obsidian spikes tear from the ground to claw at skies of purple and gray. The few clouds are ragged and pale, and the occasional flash of lightning sets everything into stark relief. Things rot under pools of black oil, ready to yank prey down to a gruesome end, and mummies wait in elaborate tombs that were not built by hand, but grew from the land like cysts.

While death is the natural end to life, there is nothing of rebirth and healthful change in Regulos’s realm. The Plane of Death devours, it erodes the flesh from living bones, stealing vital energy. Its denizens spread slow, painful rot through virulent diseases, or infect the mind with fear, nightmares, or outright compulsion.[2]