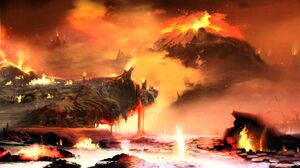 Concept Art of the Plane of Fire.

One of the six elemental planes, from which the dragon god Maelforge of the Blood Storm came.

Beasts rest in a glade, sipping sweet water from a trickling stream, soothed by birdsong from boughs high above. And then a glowing, orange slit opens in thin air, waves of searing heat pulsing from it in all directions.

Small volcanoes rise from the ground as grass and soil burn away, leaving cracked, ashen bedrock. Ungerground gases poison the tress, the smell of sulfur seeping between withered roots. Where once brooks flowed, trees bloomed, and life abounded, this Fire Rift brings streams of lava, charred stumps, and the smoldering corpses of every living thing caught in the inferno.

Every rift carries the threat of death and planar invasion, but the incendiary magic released by a Fire Rift consumes everything. Monsters rush from the rift, roaring like a flame, eager to waste the land and roast the innocent in their homes.

The Plane of Fire: Fields of Flame[edit | edit source]

The Plane of Fire is a broken and cracked expanse of sharp rocks and blasted mountains, valleys obscured by smoke and ash. Volcanoes rise thousands of feet into the methane sky, spewing rivers of molten rock into seas of fire that the plane’s denizens walk upon as if it were harmless soil.

Razor shards of stone carpet the scorched plains, where fire elementals and ifrits clash together in a riot of joyous violence. Demons fly between the jagged peaks, plucking goblins from their lairs in handfuls to gorge upon.[1]