One of the six known planes, from which the dragon god Akylios of the Blood Storm came. 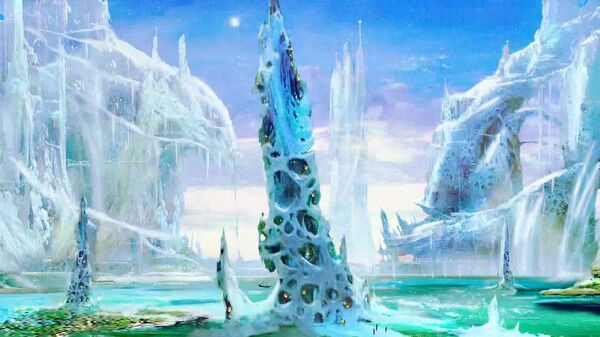 Concept Art of the Plane of Water.

The surface of all water is a membrane between sanity and lunacy, between the open air and the dark depths. By the shores and in the swamps, where real meets surreal, the Water Rifts form, letting madness loose upon Telara. Stay away from the water! Better to fish in the sand than risk ever meeting the gibbering, slimesome horrors that slither from the nightmare plane.

But then, a Water Rift can take hold even in the driest desert. Salt water rushes from nowhere and spreads into a reeking lake, from which tentacles rise and quiver in frantic rhythm. Toothed tendrils writhe from a rent in the sky, living creatures drown on land, and monsters spill from the rift like rotten fish from a net.

The Plane of Water: the crushing dark[edit | edit source]

Be thankful that the planes are closed to mortals, for mere moments of gazing into the Plane of Water would snap the sturdiest psyche. This is the plane of nightmares, the bottomless depths of its endless sea mirroring the darkest corners of the mind.

Reefs grow that defy geometry, where unclean creatures build cities and play their games of torture and depravity. Colossal creatures lie entombed within the glaciers that float upon the Plane of Water, awaiting word from their master to push through the rifts and swallow continents.

Touched by Water: the things that should not be[edit | edit source]

Watertouched invaders merge the worst bestial traits with the worst human urges. Fish-headed, with squirming tentacles for legs, the cephalons build fluted cities deep beneath the waves and hold depraved revels, hoping Akylios will wake and lead the dance. Slouching sobeks with scaly hides and crocodile jaws wallow in everything cruel and lazy. They have long served as enforcers for Telaran sorcerers arrogant enough to summon them.

The Plane of Water breeds twisted beasts such as notchback crocodiles with catlike legs, and dragon turtles that walk upright, twin heads spouting blasphemy. Deep ones lurk in seaside caves, crab-faced hulks whose pincers can crack the spines of giants. Like a maniac’s smile, the things that wash up from the Plane of Water resemble something healthy at a glance, but a second look reveals the alien, awful thing before you.