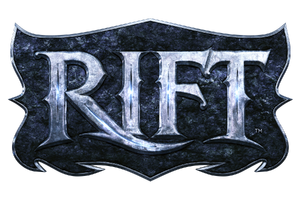 RIFT (previously known as Rift: Planes of Telara and as Heroes of Telara while still in alpha testing), is a Free-to-Play (previously Pay-to-Play subscription based), massively multiplayer online roleplaying game (MMORPG). It has been under development by Trion Worlds since 2006[1], and was released on March 1st, 2011. It features dynamic content, of which the most visible type gives the game its title, Rift.

Rift was in development from 2006 until its release in 2011. A trailer featuring game footage was released for the Electronic Entertainment Expo (E3) in late May 2009 and was featured on the 2009 Spike TV's Video Game Trailers program.

In early 2012, a free-to-play model (Rift Lite) was adopted, with some restrictions for new and returning players up to level 20. In October 2012, for preparation of the expansion, Trion Worlds created a new server structure, where server capacity was "effectively doubled" and confined to a single wargroup. Currently there are 8 servers for North America and 10 servers for Europe.

In November 2012, the expansion Storm Legion was released. This expansion tripled the land mass of Telara; raised the level cap to 60; introduced dimensions, a form of player-housing; and added additional soul choices to each class. Trion Worlds announced that Rift would become a free-to-play game on June 12, 2013.

On June 12, 2013, Rift discontinued the subscription fee. Prior to that date, Rift required a monthly subscription fee for continued play, or purchase of prepaid game cards. Rift is now free to play up to the max level. There are however bonuses if you do choose to pay for "Patron" status.

On June 25, 2014 Trion Worlds announced another expansion for Rift was in development. The expansion Rift: Nightmare Tide was released October 22, 2014. The expansion added new content including a mini game called Minions, an expanded mentoring system, new zones including the Plane of Water, and raised the level cap to 65.

On March 2016, Rift was given support for multicore processors and the client was updated to 64 bit to increase performance.

On November 11, 2016, the expansion Rift 4.0 Prophecy of Ahnket was released. This expansion added Celestial Lands including 5 new zones; raised the level cap to 70; introduced planar fragments, a system to upgrade fragments through Planar Infusion; and Legendary Powers.

On July 20, 2017, the expansion Rift 4.2 Celestial Storm was released. This expansion added a new zone to Celestial Lands and four new Primalist Souls.

In March 2018, Trion launched the game's first progression server called Rift Prime, which featured sequential expansions unlocked throughout the year, minimal cosmetic item shop and a fresh start for all characters created. This server required a monthly subscription to play.

On April 7, 2019, RIFT Prime closed down. Players were able to transfer their characters to RIFT Live.