Realm of the Fae (Dungeon)

Edit this Page
watch 01:25
Jurassic World: Dominion Dominates Fandom Wikis - The Loop
Do you like this video?
Play Sound

Realm of the Fae is a dungeon in Silverwood aimed at the level 16-19 player.

Within, players will progress through the four seasons; from spring to summer to fall to winter. Players will encounter Bosses somewhere in each "Season", eventually facing the Fae Lord Twyl.

See Realm of the Fae (Expert) for specifics in the expert mode version of this instance.

The order is not important, but both guardians should be killed to make the fight much easier. Killing Lifeward Brae first can make the fight easier for the healer.

After both of the guardians are dead, defeating Maelow is straight forward. He will stun the tank with Wild Kick, and occasionally cast Cottontail on a random player, transmogrifying that player into a bunny. If this is cast on the healer it should be dispelled if possible.

Luggodhan is the Lord of Summer, and lives in a pool inside Realm of the Fae.

The boss will use a damage over time spell throughout the fight that can be dispelled. Also, he will select a random player and throw a poisonous pool (Luggodhan’s Slime) under them which will cause additional damage. Simply move out of it and you will be fine. The fight itself is a simple tank and spank encounter. 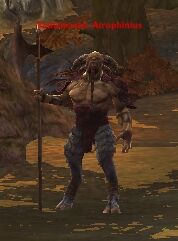 Battlemaster Atrophinius is the lord of Autumn and has two adds assisting him.

Battlemaster Atrophinius has two adds that will pull when you engage him, but these are regular, weak mobs with little to no influence on the fight. They can be burned down or ignored, and will disappear once Atrophinius is defeated.

The fight itself is very easy. So long as your group does not stack up, his cleave attack won't bother your healer, and his charge and knockback, while slightly annoying, isn't anything special either. He sometimes drops aggro after charging, so the tank should taunt him back if this happens.

Positioning your tank with his back against something solid means your tank wont spend copious amounts of time catching air, and will be able to hold aggro very easily.

Fae Lord Twyl is the Lord of Winter, the creator of the Realm of the Fae and also an ally of Greenscale.

Before you can fight Twyl, you must defeat his three Avatars. In Order; The Avatar of Autumn, The Avatar of Summer and the Avatar of Spring. The next Avatar will only summon if the previous avatar has been killed

The first avatar has one Ability 'Haze of Wine which dazes a random player. Cannot be interrupted.

The second avatar will split in two once his health has been depleted, the new versions with less health and less damage than the original. These will again split in two, and after one more split they die for good resulting the the defeat of this Avatar.

The last avatar will summon waves of non-elite mobs which can be easily killed. You should kill the summoned mobs as soon as possible, because they will remain in the fight with Lord Twyl.

Fae Lord Twyl himself will cast a freeze on a random person rooting them in place, and has no other abilities. There is a small green light called 'Fae Tempest which will move about randomly on the ground. If this hits a player it deals moderate damage, so it is best to try and avoid it if possible.

No random drops are known for this instance.