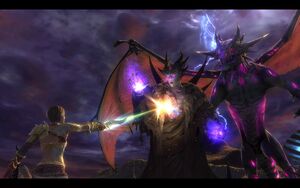 Regulos, The Destructor, the Dragon of Extinction, the Devouring Snake, is the greatest[1] of the six dragon gods of the Blood Storm. Regulos hails from the elemental Plane of Death.[2] His physical body was destroyed and his spirit banished at the end of the Blood Storm Wars. He now seeks revenge upon the people of Telara for doing so, and although he did waken the other members of the Blood Storm, he does not necessarily get along with them - he hates Crucia. His Dragon Cult is the Endless Court.[3][4]

Regulos lies. He promises his cultists peace through death, but the peace of the void is not prosperity. He promises his lieutenants eternal power over the undead, but will unmake and consume all of reality to sate his hunger. Even his dragon form is a lie, rotting flesh disguising his incomprehensible nature within a cage of bone and sinew.

The Destroyer hungers, seeking to end the keening screech of life. Thanks to the treachery of his fellow dragons and the unforeseen heroism of Telara’s defenders, Regulos remains banished to the Planes. But when his pawn Aedraxis Mathos broke the Ward, Regulos’s hideous energy flooded once more into Telara. If he is not stopped, the Devourer of Worlds will consume everything, and stretch his bloated form across all creation.[5]