Stonefield is the third zone for the Defiant faction. It's a level 20-26 zone and is connected to four other zones: Scarlet Gorge, Scarwood Reach, Freemarch and Shimmersand.

Thunder in the Hills[edit | edit source]

Wind rattles like labored breathing through the hills of Stonefield. The grass strains to stretch across rounded hills that bulge together like the muscles of some vast stone giant, ready to tear through the grass and stride out from the deep earth to crush mortal men.

Sleepers in the stone[edit | edit source]

Long, long ago, the brilliant and mad sorcerer kings of the Eth dared to call titans to Stonefield from the Plane of Earth. The Eth put these beings—perhaps the purest expression of their element’s invincible might—to guarding Stonefield’s priceless sourcestone mines.

Stone is not just hard and strong but patient, cold, confident, hiding veins of brilliance. The titans waited, and plotted, and slowly raised an army of mountain trolls, earth elementals, and troglodytes. Without warning they rose up, and swept the Eth from Stonefield like an avalanche.

With ingenuity, tenacity, and years upon years of bloody fighting, the Eth overcame the titans and bound them deep under the hills. It is said that they rage within their prison-tombs, and every avalanche and trembling rock, every shift in the stone, is the result of some furious titan slamming his fist into an unyielding wall.

The Bones of the Earth[edit | edit source]

In some places, the titans’ influence bursts through the very stone. At Titan’s Rest, the skeleton of a particularly vast specimen juts from the hills, jaw agape in an endless scream. Rocs flit between his ribs, as if hoping to pick an ancient scrap of meat from the bones.

Mountain Trolls wander his upturned grave, resting against his wrist-bone or making their lairs in his empty eye sockets. These rough-hewn brutes are split into two factions: those who yearn for a return to titan rule, and those who savor the freedom to roam the hills, smashing and slaying at will. When trolls from rival camps meet, they charge at each other, their bulbous feet tearing the earth, and crash together like boulders. Cracks in the titan’s massive bones might be evidence of where one troll smashed in another’s head.

Granite Falls is just as dry and barren as its name suggests. Once, this was a prosperous mining town, its skilled miners tapping some of the richest sourcestone veins on Telara. The miners respected the earth, and never dug too deep for fear of waking the ancient prisoners. This sensible approach has done nothing to protect the townspeople from calamity after calamity since the coming of the rifts.

Displaced from the Deepstrike Mine by the Endless Court, the people of Granite Falls have lost their livelihood, the unemployed sit, surly and despondent, in the overcrowded tavern. Adding injury to insult, a mysterious illness has swept through the hill folk, poisoning even the miners’ leathery lungs.

Those who succumb to disease, hunger, or despair find no rest, for the dead rise in the cemetery outside Granite Falls, eager to swell their numbers with the fresh-killed corpses of mourners and passersby. Death Rifts are now nearly as common in the hills as Earth Rifts, and nothing in Stonefield stays buried long.

Transcript from the lectures of Haru Windsworn, Master of Bahmi Studies in Meridian
“Today, we are honored by the presence of Bora Temurgal, Ascended reaver of the Red Sun tribe. As you can plainly see, the Bahmi emblazon themselves with narrative tattoos called ‘sefir.’ Unlike Mathosians, bragging around their campfires, the stoic Bahmi save their breath by writing their exploits on their flesh. Here is a particularly rousing tale that stretches from First Hunter Temurgal’s lower biceps to loop around her wrist. I will read it aloud, and those of you who did your coursework are free to read along.

I killed a troll, and this was strong.

He thought to strike me from ambush. I heard him coming, Loud as tumbling boulders. His fist hammered down, But he crushed only earth. His teeth gnashed shut, But he chewed only air. My axe tore a canyon into his throat. He thrashed and he reached for me. He clutched only death. To be sure, I put my axe in his head. And I sat on his corpse awhile, Wondering why, as he died, He grunted the name ‘Centius’

And this was wise." 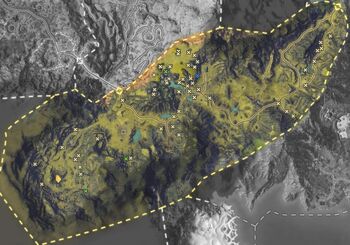 The location of various artifact collections in Stonefield.

Item set: Lockets of the Lost

Item set: The Rule of the Titans