Back to template
Add topic

Just a note that we also used to have Template:Armor and Template:Weapon. We can maybe make a more complex conditional template to handle everything, but in the short term, separate ones seemed the easy route. This template is for stuff that doesn't fit as a weapon or armor (or whatever other specific templates we ened) --Ciovala Talk 10:42, 14 January 2011 (CST)

I fixed up the category section a bit to work a little bit better. (Basically simplified it all)

Can you add a |Desc= variable ? Bags like Burlap bag have a text who say "6 Slot Bag" in white under the container word.

Also, I think we should change the Bag page for Container since we dont know yet if there other type of container like Toolbox or Whatever. --Rubius 23:05, 18 January 2011 (CST)

I can add that. I'll prob make it |bag=Y where Y is the slots available. As for change the Bag page for Container, what exactly do you mean there?

All Containers are not Bags. We may discover like a Techno Toolbox who used as a Bag or what ever :) Also, for quest items, I would need a |quest=" " thing who link to the quest. Its in yellow in the tooltip. Also, We need to remove the Price tag for Quest Items. http://telarapedia.com/wiki/Faebane_Net Probably easy to do with a if type = is not Quest, then {show the price} Thanks :) 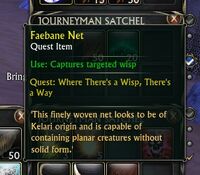 I'll just add 'bag' for now. If it turns out it needs more variables etc. I may put it into it's own item template... but just a |bag=xxx until then. I can organise a boy to mass update other pages as needed if things go awry down the track. I'll get the {{item quest}} create shortly too (watch the RC notice for a new page:P Maygus talk • cont 23:58, 18 January 2011 (CST)

Oh and I just discovered a NEW type of toolbox for Collectibles. Here, hope it help you for something.

Should we add the price at merchant and make it distinct from the Selling price? It would be practical for things like Potions, Materials for Crafting and all that.--Rubius 00:53, 19 January 2011 (CST)

Would like some clairfication on value/costs for items?
is it the buy price or the sell price that you want added, for example, Threads for outfitting cost more to buy than to sell. .--Larryl0099 00:28, 01 March 2011 (GMT)

We need to use proper names and not just 'mch'. Well, we don't have to, but it will make the Forms work a lot better and also allow properties that make sense. For example, Calling instead of call (see http://telarapedia.com/wiki/Property:Calling for example), in addition to stuff like mch. The use of forms will enforce it being entered correctly. Also, I see 'stats' as an option but you can enter them explicitly as well - let's chat in IRC. Great job though, it's awesome to have this template!--Ciovala Talk 12:41, 22 January 2011 (CST)

What do you recommend to do for other costs like Artisan's Mark, favor, etc.? We could just use multiple templates (have a few cost ones now) and put them in the same area on the resultant display template? --Ciovala Talk 06:01, 23 January 2011 (CST)

We need a block variable, by example [Demonguard Bulwark] have a bonus to block of +8. :http://www.riftjunkies.com/wp-content/gallery/iron-tombs-third-boss-loot/boss3b.png --Rubius 13:12, 23 January 2011 (CST)

Done! I've also added spellcrit and a few other items today (check the doc page, it is current), plus added all to the form. Next bit we need to do is handle multiple prices in artisan marks, etc. --Ciovala Talk 13:24, 23 January 2011 (CST)

Vanity text needs to be higher then reputation. DONE

In one case, the earth resist is referred to {{{ere}}} instead of {{{eres}}} and is causing a problem in the code as seen on the Crushed Wisdom page. Just wanted to point this out. Shouldn't be too difficult of a fix to make.

This was fixed a while ago and we didn't update the talk page. Thank you for bringing it to our attention. --Ciovala Talk 15:29, 3 February 2011 (CST)

Can we split the type=consumable into Runes, Potions, Scrolls, etc? The according categories are already listed in Category:Consumables. A tab menu for that category page (like for armor and weapons) would also be nice. --Mardur 15:28, 3 February 2011 (CST)

Talking about Armor categories. There is some confusion between Category:Waist Armor and Category:Belt Armor. The belt items should be moved to waist, as this appears to be the correct notion. --Mardur 15:51, 3 February 2011 (CST)

Again Armor categories. There are 2 different classifications, slot (head, hand, ...) and material (cloth, chain, ...). I searched for items in only one of these classifications and fixed them. I also found Burlap Cloth which appears as Cloth Armor by type=cloth. If we want to use this template for crafting components, the material type should not imply armor. Male/Female pictures from Item2 created by the form also makes no sense here. --Mardur 16:55, 3 February 2011 (CST)

We should discuss what properties to include as well. So far we're not really using them on Items, but just on NPCs and Quests. --Ciovala Talk 15:57, 3 February 2011 (CST)

True! I am just wondering at what point any of this impacts performance much? Apparently wowpedia used to use SMW and it was removed due to performance issues. I rather doubt Rift gets as huge as WoW, but I would like to not end up turning off SMW some day.--Ciovala Talk 17:01, 3 February 2011 (CST)

Performance is a good point. So we might not turn every single piece of data into a property value and use queries only where they are useful (display useful information for the viewer while reducing the manual editing effort for the writers). So which queries do we want to use and which properties are required to do that? --Mardur 10:19, 4 February 2011 (CST)

Seems like only you and I have a view on this so far. :) But yeah I say lets keep it simple for now with some main properties which will assist when people want to do queries. The instances that overlap properties from the Quest (and other) forms is a good start. It just means tweaking a few templates, really, but your ideas so far are good here and fit with the ones being set in the Quest template and form.--Ciovala Talk 16:08, 5 February 2011 (CST)

I was busy playing the beta last weekend, yay, collecting lots of item and quest screenshots. Item to Quest correlation is useful (like NPC to Quest). However, it should be better to specify the list of items on the quest pages (e.g. Rewards::Item::Epic Dagger of Doom), and then use a query to get the quest(s?) per item (#ask: Quest:+ Rewards::<item name>). --Mardur 09:59, 9 February 2011 (CST)

I've been busy myself and I'm off to California for a couple of days from tomorrow! So far I've just added Level and Calling properties to the template. Glad you got to play beta. :D --Ciovala Talk 10:14, 9 February 2011 (CST)

The list of values for type is quite confusing for me. It is actually specifying the subtype (Bow, Wand, Leather, Quest, Lesser). The main type (weapon,armor,consumable,quest) is not specified directly and not uniquely determined by the subtype:

To keep the keywork "type" for bow/staff/chain/etc, there should be another "super type" or "item category" to specify what it actually is, especially to avoid confusion between burlap cloth and cloth armor and also to simplify the if/case selection (if type=sword or staff or ... then it is a weapon) in the template. I prefer category=armor/weapon/.... Here is a list of categories and possible types and other information:

How are these "containers" called that drop from rifts and give you one random consumable? There are also containers from mining that return a crystal (edit: found it, Opal). For potions, Lesser/Greater is a strange type (is there something in between?), which is just part of the name and usually redundantly specified by its rarity. --Mardur 10:22, 9 February 2011 (CST)

Also noticed that in the beta. Updated list. And what is that Novice Armorsmith Supply Bag? Is it an actual bag or does it work like an opal which "drops" other items when opened? --Mardur 06:23, 17 February 2011 (CST)

Im trying to use Crafting material to update the Outfitter items (will do the other items as time permits, but it doesnt appear to be working, can someone let me know the correct format for the "type" line pls (assuming that it works? --Larryl0099 17:58:23, 28 February 2011 (GMT)

Hi Larry, Just use 'Crafting' after type. I will update the template shortly to reflex this so it will start to work for you automagically. Maygus talk • cont 00:51, 1 March 2011 (UTC)

When creating a crafting item, the drop-down box in the "Add an Item" wizard populates Type with "Crafting Material" which is unexpected as per the template - it should be either "Craft" or "Crafting". Aleph 05:02, 24 April 2011 (UTC)