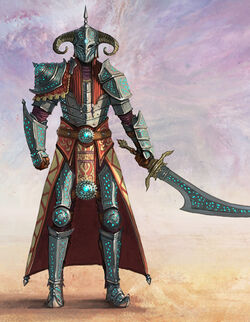 The Defiant do not care whether the gods abandoned the world or not. To them, this entire planar convergence disaster is the gods' fault in the first place. Indeed, as soon as things went from bad to worse, the gods suddenly and inexplicably disappeared. So while the Guardians run around Telara building temples, sticking their noses in everyone's business, and desperately praying for a miracle, the Defiant plan on actually delivering one, even if it means being branded as heretics and operating outside the laws of the land.

Above all else, Defiants are rugged individualists who love technology. Mixing technology with magic offers amazing opportunities for innovation, personal power, and cultural progress. If used correctly, these advancements could also be turned into spectacular weapons to fight the looming darkness. The Defiant absolutely believe that the best defense is a great offense - something the Guardians will never understand. With the help of enough eldritch war machines and magical innovations, Defiants believe the people of Telara will have the power to destroy the dragon gods themselves, without needing to rely on outdated religious dogma. When Telara is saved, the Defiant will be at the head of a new technomagic age, in which every facet of life is touched by their innovations.

While some Defiants might reluctantly acknowledge that their methods are dangerous, potentially posing risks to the integrity of the world, they will be quick to point out that the world seems to be ending anyway, so everything is worth the risk. Besides, if the world is destroyed, who will be around to complain about it?

The future went horribly wrong, the Guardians alone failed their divine call, and the world is coming to an end. However, not all hope is lost. Though the Gods creation, the Demi-Godlike Guardian "Ascendants", failed to save the world directly, their very existence made the opportunity for some brilliant minds within The Defiants to research their secrets, and craft their own replicas of these powerful beings. Though the current timeline is lost to the forces of destruction, the future Defiants manage to send several of their manufactured Ascendants back to the past, bringing the blueprints for further Ascendant production. Asha Catari, being the first Defiant Ascended, was given life by the original resurrection machines of the ancient Eth, which were discovered by Orphiel Farwind. Unfortunately, these machines did not contain sufficient power to create the army of Ascended needed to combat the Blood Storm. In the original timeline, as the Ascended Guardians continued to lose ground to the Blood Storm, the Defiants worked in secret to create new resurrection machines with which to create their own force in the world. They knew they would not be successful in time to halt the advance of Regulos, so they constructed a machine to create an anchor point at the Ark of the Ascended outside their stronghold of Meridian. With this anchor point, they could send their forces backwards through the time stream once they had discovered the means to create Ascended of their own. As time went on, and the armies of Regulos began to claim their ultimate triumph, the Defiant finally had the breakthrough needed to create Ascended of their own. Frantically, they began sending these temporal warriors en masse through their time gate in a last ditch effort to save Telara and rewrite their history. At the very moment the last of the these Defiant Ascended stepped into the time portal, Regulos himself entered Telara through a major Death Rift. As the last of the Defiant Ascended was launched backwards in time, Asha Catari, the Champion of the Defiant, was slain by the might of the Death God. Arriving in Telara's past, these Defiant Ascended are determined to rewrite the timeline and prevent Regulos from devouring the world.

Asha Catari's final words to you, as she battles Regulos

Go Defiant! Fight your way back to the past! And deliver the warnings of this failed future. The cults WILL release the dragons. The Ward WILL fall and Regulos will descend on Telara, bringing us face to face with our annihilation. If you do not stop this chain of events, everything we have worked for, everything we have died for, will have been in vain. You are our one chance to alter history Defiant. You must forge a new future for Telara.'

There have always been those who follow the will of the gods, and those who question them. While none denied the Vigil's part in the miracle of the Ward, certain individuals and groups did not believe this was the only, or even the correct solution to the problem of the Blood Storm. Nor, they maintained, did the gods who built the Ward deserve unquestioning loyalty. The Vigil promised their worshipers unmatched power, but still some refused, such as the Eth and the Bahmi of Rhaza’de. Thus the world was divided between those devoted to the gods, and those who seek power by other means.

The Dragonslayer Covenant was formed as an order of Telarans — primarily Eth and Bahmi — sworn to keeping watch over the Dragon Cults and preventing the Blood Storm Lords' release. Given the Covenant's embrace of Eth technology, none of the Vigil’s devoted races joined their initial ranks. Even after the Eth fell in the Convocation, the order persevered.

In the days preceding the Shade, the Dragonslayer Covenant uncovered evidence that Prince Aedraxis Mathos had been consorting with members of the Endless Court. Covenant leader Orphiel Farwind sent their most adept mage to warn Aedraxis's brother Zareph. With the calamity of the Mathosian Civil War, death and horror spread over the land in a choking cloud, and the Dragonslayers lost many of their greatest trying to defend the people of Telara. Orphiel's envoy, Asha Catari, died battling alongside Zareph and his generals.

The Covenant had been devastated, their numbers too far reduced to halt the continued devastation of the crumbling Ward. Mourning their loss, Orphiel took his remaining followers to join the survivors at Port Scion. As the people rebuilt, he began investigating the remains of Eth technology. While a general edict had gone out to destroy all records thereof, the Covenant had kept a few in their leaders' most private archives.

Orphiel spread the belief that this technology should rise again, desperate times calling for desperate measures. Aided by a few close confidantes, his idea reached more and more ears. Many Telarans felt as though the gods had abandoned them, and so the climate was ripe for change. Just as Orphiel's philosophy started to catch on, the first of the Ascendants returned to the Guardians.

With these holy warriors wielding divine power in defense of their world, most Telarans felt assured the gods had a plan to fight the Blood Storm once again. Others were not so certain. Having lost much of the support he had begun to build, Orphiel continued his pursuit of Eth technology. Even the other members of the Dragonslayer Covenant turned away from Orphiel, forcing him to leave Port Scion with his remaining followers. His studies led the small band of scholars to the Shadowlands, following rumors of preserved Eth machines. Before the fall of the Ethian Empire, a splinter group of Eth mages sought forbidden avenues to eternal life, and so their secret workshop survived the purge of the Convocation. Orphiel discovered their long-abandoned site and powered their machines back up, delighted to find that with only a little bit of tuning, they worked perfectly once again. Lost members returned to the Dragonslayer Covenant, beginning with reborn Ascendant Asha Catari. They have dedicated themselves to uncovering the technological secrets of the Ethian empire.[1]

Despite objections from the Ascendants of the gods, Zareph Mathos was open to utilizing both great powers, and cautiously sanctioned continued investigation into Eth technology. Since Zareph was lost in the fall of Port Scion, no leader has emerged to unite Telara's survivors, and the Guardians demanded an end to the use of sourcestone machines. Orphiel and his followers' refusal to comply caused a deep schism, pitting their faction against Cyril the Champion and his Guardians.

Establishing themselves within the tower of Meridian in Freemarch, these "Defiants" moved forward with their studies, devoted to creating their own line of defense for Telara. [2]