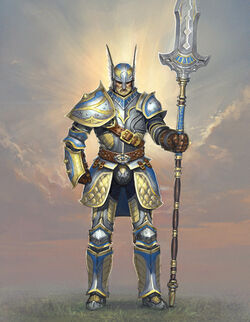 The Guardians are a faction in RIFT. They are the chosen of the Vigil, comprising the races who put the most faith in the Gods - the Mathosian, High Elves and Dwarves.

The Guardians represent the sincerest belief that the Vigil, the five gods of Telara, have not abandoned the world, but are working towards an intricate plan for the final battle of good against evil — the Day of Judgment. Members of this faction feel they have a destiny to fulfill as part of a divine plan to save the world.

The Vigil chose the Guardians from the three races of Telara who most put their faith in the gods, including the fearless Mathosians, the wise High Elves and the uncompromising Dwarves Though each race is beloved of the gods, each seeks redemption for the sins of their leaders: Aedraxis Mathos unleashed the Shade, Prince Hylas broke the Elves' ancient covenant with the gods, and the Dwarves trafficked with unspeakable forces to achieve wonders of crafting and prosperity. Thus, the Guardians represent both the hopes of the world and of their fallen peoples.

The Guardians see themselves as the protectors of the people of Telara. They believe it is their sacred responsibility to bring law and order to the defenseless, even if they do not seem to appreciate or want it. Many do tend to be overly judgmental and controlling of the places they rule, but in the end they believe it to be in the people's best interest. And all Guardians believe they serve the greater good by protecting the masses from the rifts, or from themselves.

Within their holy city of Sanctum, the Guardians stand as bold sentinels against the dragons and their cults. Their crusades assault the undead armies of Regulos, their inquisitions purge the secretive cults of Akylios, and their agents search for sinister signs as far away as the deserts of Shimmersand. The Vigil does not dictate a single path to salvation, so the Guardians seek their own place in the holy litany by ending the corruption of the dragons and the blasphemy of the Defiants.

The Guardians believe that a convergence of all the planes is coming and will destroy the world. It is their holy mission to prevent this catastrophe by restoring the Ward of Telara, and sealing off the planes forever. To this crusade they have sworn themselves — even if it means destroying the reckless Defiant faction before their foolishness ends the world before Regulos does.

The Guardians are driven forward by the memory of Telara's countless fallen innocents, who cried out for salvation as the world was shattered, only to be consumed by the Destroyer. This, the Vigil reminds them, is what the Guardians must strive against, lest millions more meet the torment of oblivion in Regulos' jaws. Only the light of the Guardians stands before such all-consuming darkness. The Vigil dictates no single path to salvation, so the Guardians seek their own place in the holy litany by ending the threat of the dragons and the blasphemy of the Defiant. [1]