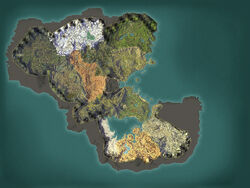 Rift: Planes of Telara features many exciting locations and dungeons for players to adventure through. Rich with history and lore, the world of Telara will reward those strong enough to survive. A player can walk across the face of Telara without encountering a load screen, since it is a seamless world with 'zone lines'.

A zone has usually one or two main settlements. Players can find here specific vendors that sell gear for Favor (PvP vendor) or planar currencies (Rare Planar Goods vendor), as well as quartermaster of the NPC faction of the zone. A porticulum for faster travelling between zones is also near the main settlement.

Each faction starts in its own instanced zone. For Guardians it's Mathosia, Defiants have Terminus. Players advance through the zone up to level 6 and then upon entering the final rift, they are teleported out of the zone into their low-level zone and will never return back.

Some zones are ruled by Guardians or Defiants, in other zones both factions established their own camps, and there are also zones with neutral NPC factions providing quests for both Guardians and Defiants. Zones cannot be conquered by opposite faction, although enemy settlements can be temporarily occupied by destroying their wardstone.

Dungeons are special locations in Rift: Planes of Telara that are accessible to anyone from individuals to groups or raid parties. The dungeons are instanced, that is, every group joining the same dungeon will be separated from other groups and the open world. The surroundings and encounters in each dungeon are different, some even feature rifts or have the entire dungeon change around you as you progress.

Chronicles are instanced areas designed for 1 or 2 players to complete. With a reasonable level of gear, most players will be able to complete a chronicle on their own.

Raids are a type of mission, where the objective is to use a very large number of people, relative to a normal team size set by the game, to defeat a boss monster. Raiding is large-scale combat (of usually two more more in-game groups) against a common enemy; one source says groups are of 5-20 people.

Added with patch 1.2, slivers are entrances to alternate time streams, and can be seen by using Omen Sight for Guardians or Quantum Sight for Defiants. This ascended skill can be bought from the Planar Goods merchants in Meridian and Sanctum for 25.000 planarite.

Slivers aren't visible to outside players, but when inside a sliver you appear to be in a giant bubble and can look out into the zone where the tear was formed.

Abbess Katia in Sanctum and Raj Tahleed in Meridian offer a daily quest to conquer a specific Raid Rift. This quest is often referred to in level 50 chat as DRR (Daily Raid Rift).

A Lure is needed for the specific rift targeted. The Lures (or Husks) can be purchased from the Planar Faction Quatermasters in the same room as the quest giver. One Lure per week can also be obtained from Abbess Katia, or Raj Tahleed (Taking the Fight).